This blog by Kate Echevarria was originally posted on the Smithsonian Science Center Blog.

Sharon Dotger is an Associate Professor of Science Education in the School of Education at Syracuse University. She is a lesson study researcher and a practitioner, hosting or participating in more than a dozen open research lessons with teachers in the last decade. Additionally, she has rewritten her on-campus methods course to embody as many features of lesson study as possible and is always on the lookout for more opportunities to make lesson study come alive for her students. Sharon has presented about lesson study in the United States and abroad and supervised lesson study research studies with five doctoral students.

Jessica Whisher-Hehl is the Science Coordinator for OCM BOCES’ Center for Innovative Science Education. Jessica supports K-12 science in 23 school districts by providing professional development and leading an elementary science curriculum materials program. As New York State is in the process of adopting new science standards based on the Framework for K-12 Science Education and the NGSS, Jessica is tasked with leading the region in the implementation of the new standards. A major component of this effort includes transitioning the elementary science curriculum materials program, which serves over 1000 classrooms, to the new units being developed by the Smithsonian Science Education Center. Jessica is currently a doctoral candidate in Science Education in the School of Education at Syracuse University. 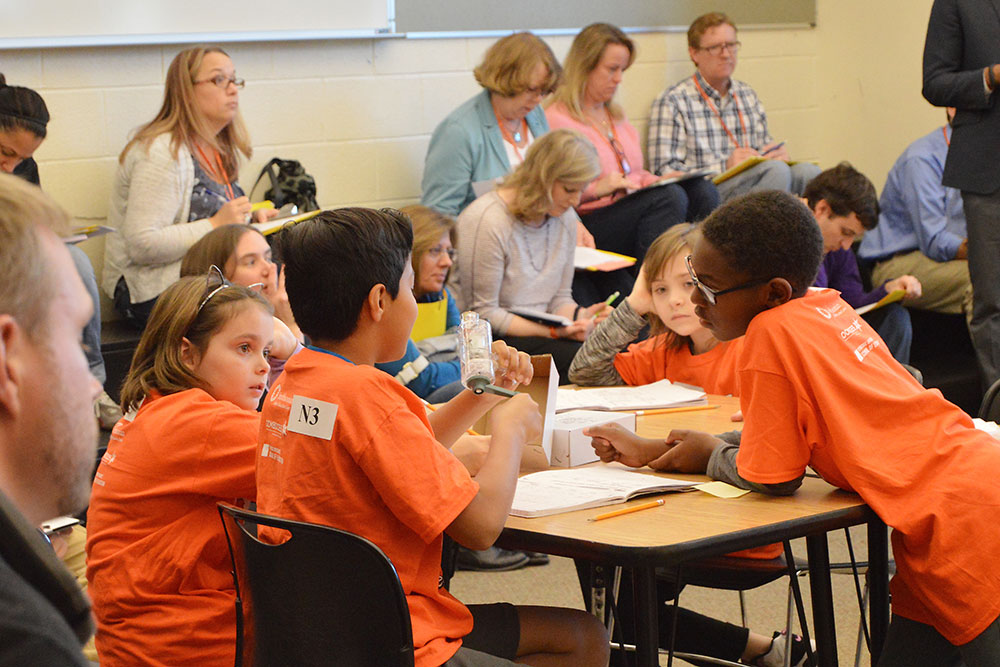 A Vignette: A class of fourth-grade students are using hand generators to make observations of change before and after an “interaction”. Their teacher circulates among them, asking clarifying questions about their thinking and encouraging them to add ideas to their science notebook. Surrounding the perimeter of the classroom, 40 teachers and administrators are carefully taking notes about the students and their thinking. At one table, four children are passing the generator among them: END_OF_DOCUMENT_TOKEN_TO_BE_REPLACED

The upcoming New York State Science Learning Standards (NYSSLS) based on the Next Generation Science Standards (NGSS), like other educational reform efforts will require a shift in instructional practices. The full incorporation of all three dimensions (disciplinary core ideas, crosscutting concepts, and science and engineering practices) increases the complexity of instruction more than previous reform efforts and well-designed science curriculum materials are one mechanism that can support teachers making the associated instructional shifts (Bismack, Arias, Davis & Palinscar, 2014). “Well-designed reform-based materials can be a key component of efforts to support teacher change” (Schneider, Krajcik & Blumenfeld, 2005, p. 287). Curriculum materials, as discussed herein include the materials teachers use in the classroom including published materials (printed or electronic), resources, and artifacts or manipulatives that are designed to facilitate classroom instruction (Davis, Pallincsar, & Arias 2014; Remillard, 2005; Stein & Kim, 2009). END_OF_DOCUMENT_TOKEN_TO_BE_REPLACED

The New York State Science Learning Standards (NYSSLS) were presented to the Board of Regents in June, with an anticipated adoption this fall. These new standards, based on the NGSS (NGSS Lead States, 2013) and embodying The Framework for K-12 Science Education: Practices, Crosscutting Concepts, and Core Ideas (National Research Council, 2012), were designed and intended to be for all students. This might not seem new, but in fact it is. The previous science reform initiatives, in the post-Sputnik area, had a focus on creating more engineers and scientists. The new and explicit goal of science standards for all students is articulated frequently in the Framework and NGSS. In fact the topic has a dedicated chapter in the Framework and END_OF_DOCUMENT_TOKEN_TO_BE_REPLACED

“There is a great difference between knowing and understanding: you can know a lot about something and not really understand.”
– Charles K. Kettering

Charles Kettering was a prolific engineer and inventor who clearly put his understanding to use in the almost 200 patents he holds. His quote provides us, as science educators, a point of reflection when considering the learning experiences we provide students. Is our goal to facilitate understanding, or add to the list of things students know? The Framework for Science Education: Practices, Crosscutting Concepts, and Core Idea (NRC, 2012) clearly articulates a vision of science learning built around students developing an understanding of core science concepts: END_OF_DOCUMENT_TOKEN_TO_BE_REPLACED

What is our quest as science educators? What is the quest of scientists? What are the science learning quests of students? How are they similar?

The recent detection of gravitational waves proved Einstein’s theory that was postulated in 1916. This detection was a very big deal in the science community. Scientists are on a tenacious, never ending quest to END_OF_DOCUMENT_TOKEN_TO_BE_REPLACED

As articulated in A Framework for K-12 Science Education: Practices, Crosscutting Concepts, and Core Ideas (NRC, 2012) a foundation of the Next Generation Science Standards (NGSS) is providing a K-12 science learning experience that allows students to build an understanding of scientific concepts overtime:

“To develop a thorough understanding of scientific explanations of the world, students need sustained opportunities to work with and develop the underlying ideas and to appreciate those ideas’ interconnections over a period of years rather than weeks or month.” (NRC, 2012, p. 26).

The draft New York State Science Learning Standards (NYSSLS), were released for public review, on November 19th. A survey to collect public comments on the draft NYSSLS is expected to be released on December 2, 2015. Here are OCM BOCES Center for Innovative Science Education’s top ten things to consider when reviewing the NYSSLS:

END_OF_DOCUMENT_TOKEN_TO_BE_REPLACED

There exists unifying, pervasive, and powerful concepts that provide coherence as well as deep conceptual understanding across all disciplines of science. These concepts are not new; they have always existed and been fundamental aspects of science. From time to time these concepts have also been present in K-12 science learning experience. A Framework for K-12 Science Education: Practices, Crosscutting Concepts, and Core Ideas (NRC, 2012) names these crosscutting concepts and identifies their importance in K-12 education. Thus, crosscutting concepts are one of the three dimensions of the Next Generation Science Standards (NGSS) (Lead States, 2013). This explicit identification and inclusion of crosscutting concepts is one of the many aspects that make the NGSS substantially different from our current standards. Cross cutting concepts will also be one of the three dimensions in the New York State Science Learning Standards (NYSSLS) that are expected to be released in draft form in the near future. END_OF_DOCUMENT_TOKEN_TO_BE_REPLACED

This has been an important week in science and further points to the importance of the impending new New York State Science Learning Standards (NYSSLS), based on the Next Generation Science Standards (NGSS) (Achieve, 2013). On Sunday, September 27th we were lucky to witness the beauty of the universe in the supermoon lunar eclipse. Then on Monday, September 28th NASA reported evidence of water flowing periodically on Mars. We were awed by the eclipse one day and reminded of the ever expanding understanding of the universe the next.

Science and science education are vitally important to our understanding of our world. This fundamental connection between science and each of our lives is the cornerstone of the NGSS. The part of the goal of K-12 science education articulated in A Framework for K-12 Science Education: Practices, Crosscutting Concepts, and Core Ideas (NRC, 2012) is “to ensure that by the end of 12th grade, all students have some appreciation of the beauty and wonder of science; possess sufficient knowledge of science and engineering to engage in public discussions on related issues…” (p. 1). Our current and past K-12 science education has not prepared students to fundamentally understand science phenomena related to their world. This is evident in the fact that the majority of the people whom I have asked to explain the lunar eclipse are unable to provide a full and correct explanation. Many are able to identify that it has something to do with the Earth, moon, sun, and shadows in general, but few are able to correctly and completely explain the phenomena.

The Framework clearly articulates the importance of focusing K-12 science education on core scientific phenomena: “an important role of science education is not to teach ‘all the facts’ but rather to prepare students with sufficient core knowledge” (NRC, 2012 p. 31). Furthermore, the goal is for students to develop a sufficient depth of knowledge such that the knowledge is usable (NRC, 2012). These core and relevant scientific concepts make up the disciplinary core ideas in the NGSS. The Framework specifies that a disciplinary core idea should meet at least two (more is preferred) of the follow:

Now let’s consider the lunar eclipse and how this relates to disciplinary core ideas included in the NGSS. First, it is included in the earth and space science in the core idea ESS1: Earth’s Place in the Universe. More specifically it is in the subcategory ESS1.B: Earth and the solar system. Students first begin to develop an understanding of this disciplinary core idea in first grade by making observations to describe the predicable patterns of motion in the sun, moon, and stars. Once students observe the patterns they build on this understanding in fifth grade to include daily changes in the length and direction of shadows, day and night as well as seasonal appearances of some stars. This helps students understand orbital relationship of the Earth around the sun and the moon around the Earth. In middle school students are asked to develop and use a model to explain the patterns of lunar phases, eclipses, and seasons. Then in high school students further their understanding to include complex phenomena related to elliptical orbits and Kepler’s Laws.

So what does this mean? This means that with the upcoming NYSSLS based on the NGSS students will be able to explain and understand the phenomena related to the lunar eclipse by the end of middle school. Yes, this is absolutely possible. I have had the pleasure of working with 6th grade students as they used a hula hoop, a larger marble to represent the Earth, a smaller marble to represent the moon, and a flashlight for the sun to model the cyclic patterns in the lunar phases and eclipses represented in several years of data.

OCM BOCES Center for Innovative Science Education is positioned to support the region’s transition to the upcoming NYSSLS. We are offering professional development opportunities this fall to prepare the region for the new standards.